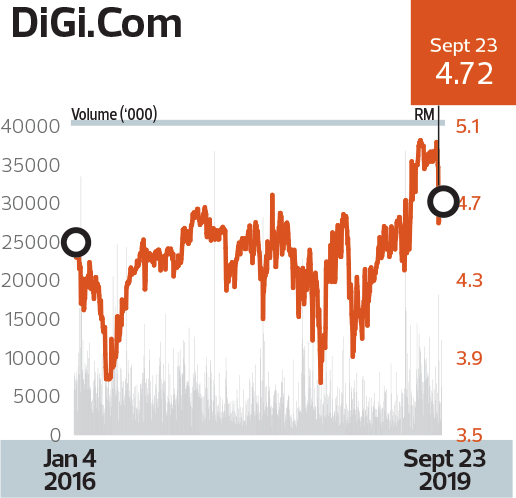 Razor-thin profit margins, high capital expenditure and cut-throat competition make up the landscape of the telecommunications industry. But it is to Digi.Com Bhd’s credit that the company still manages to generate strong returns for shareholders.

Although the telco’s return on equity (ROE) has been on a downward trend over the past three years — a reflection of the challenging landscape and the company’s investment in digital transformation efforts — it is still well ahead of that of its rivals. Digi’s ROE stood at 229% in FY2018, 284.6% in FY2017 and 314.6% in FY2016.

Its exceptionally big ROE compared with its peers’ is largely because of its high dividend payout and capital return that keep its shareholders’ equity low. Last year, it paid shareholders a dividend of 19.6 sen a share — higher than the 18.8 sen a share in the previous year — amounting to RM1.52 billion or 102% of its net profit (RM1.48 billion).

In FY2018, Digi delivered a financial performance in line with its guidance.

“Although market conditions remain challenging, we believe the solid foundation established in 2018 with our persistent drive for solid execution and digital transformation will support Digi’s ambitions in 2019,” CEO Albern Murty says in the group’s 2018 annual report.

He adds that among Digi’s priorities this year are to capture growth from existing customers and continue to drive post-paid growth and SME/business-to-business opportunities.

For the second quarter ended June 30, 2019, Digi reported a 2.1% rise in net profit to RM392.5 million on the back of stronger post-paid service revenue growth, cost savings and a deferred tax overprovision in the previous year.

However, the telco’s net profit was down 4.7% year on year to RM734 million for the cumulative six months. This was roughly within analysts’ expectations. Its net dividend was 9.3 sen a share, a slight decline from 9.8 sen a share in the previous corresponding period.

“While the results were within expectations, we trim our 2019 net profit forecast by 3% on a muted near-term top-line trend,” says UOB Kay Hian Research in a July 15 report following Digi’s results.

“Management has conservatively guided a low single-digit top line and reduced Ebitda (earnings before interest, taxes, depreciation and amortisation) for 2019.”

On Sept 6, Digi’s biggest shareholder — Telenor group of Norway, with a 49% stake — and Axiata Group Bhd mutually called off a proposed merger of their local companies’ telecoms and infrastructure assets in Asia, following four months of talks.

They said it was due to some complexities in the proposed deal. According to news reports, these included commercial issues as well as national and staff interests.

What is interesting, though, is that both parties do not rule out a possible future transaction..

Had it materialised, the merger would have spelt major changes for Digi and the operating landscape. Mergers are never easy, and this one was not just complex but also huge. It was to have involved 14 large entities across nine countries and was expected to be the single largest merger and acquisition in the region — except North Asia — in 20 years. In Malaysia, the plan was to merge Digi with Axiata’s Celcom.

Digi said the failed merger talks will not derail its efforts to continue collaborating with other players, especially in 5G.

“This does not stop Digi’s efforts in working with our ecosystem and the industry so that we can address the challenges and opportunities in 5G. There are a lot of things that go in the ecosystem and that can benefit Malaysia,” its chairman, Håkon Bruaset Kjøl, said recently.