The Edge Billion Ringgit Club’s annual gala dinner held on Dec 11 saw 40 companies picking up 55 awards for being the best performers on Bursa Malaysia based on their financial performances from FY2014 to FY2017.

Although the number of billion-ringgit companies on Bursa fell to 170 this year, their performance in terms of profitability and market capitalisation was better as a whole than the 184 that made it to the list in 2017.

This means that BRC members are truly the strongest of Corporate Malaysia.

Of the eight chosen as Company of the Year since our inaugural awards in 2010, seven have since outperformed the FBM KLCI in terms of total returns to shareholders. 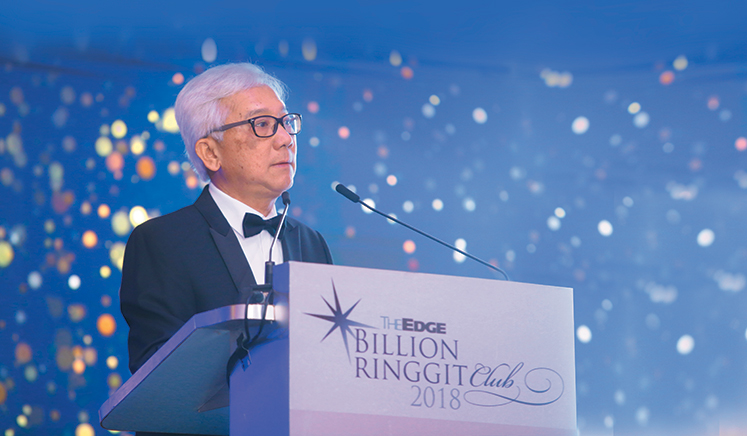 We present our sectoral awards based on three financial performance measures:

For Company of the Year, we used a matrix of financial performance in the three categories and corporate responsibility initiatives on a weighted basis.

This year’s Company of the Year was Petronas Dagangan Bhd, which operates 1,000 petrol stations with over 700 Kedai Mesra in the country, which have become one-stop centres for motorists for fuelling, shopping and banking.

The company also achieved strong recurring pre-tax profits averaging RM1.2 billion a year between 2015 and 2017 while its market capitalisation more than doubled from RM11.6 billion in 2010 to RM25 billion in 2017. Petronas Dagangan has also been generous to shareholders with dividend payouts of 60 sen per share in 2015, 70 sen in 2016 and a hefty 97 sen or almost RM1.0 billion in 2017.

He was part of the team that came up with the production-sharing contract that Petronas uses till today. In 1984, Ngau started Saga Holdings with three partners and in 1996, listed it on Bursa as Dialog Group Bhd. Today, the company is one of the biggest integrated oil and gas service providers in the region. It is a pioneer investor in Pengerang, Johor, where it owns and operates petrochemical, oil and LNG storage terminals and a deep-sea port. Dialog’s market capitalisation stands at around RM18 billion today, up fivefold from RM3.6 billion in 2010.

The success of BRC as benchmark awards for Corporate Malaysia would not be possible without the support of our partners.

I would like to thank OCBC Bank, Jaeger-LeCoultre and Mercedes-Benz for partnering The Edge in this prestigious event to honour and celebrate the best of Corporate Malaysia.

This has been an unprecedented year for Malaysia. The historic change in government has had some immediate consequences for businesses, better for some and not so good for others. A clear economic strategy to take the country forward is still in the making.

This uncertainty, together with the volatile global environment, presents many challenges to Corporate Malaysia. But as the saying goes, when the going gets tough, the tough get going, as BRC members have consistently proved.

Congratulations to all the winners of the 2018 BRC awards.

Sustaining growth over the long haul

At 170, the number of The Edge Billion Ringgit Club (BRC) members — companies listed on Bursa Malaysia with a market cap of RM1 billion or more — is the lowest we’ve seen in three years. That’s based on the end-March membership cut-off date. Had the cut-off date been pushed to end-November, there would have been only 157 members, a five-year low.

Even so, this year’s 170 BRC members’ combined market capitalisation of RM1.69 trillion was higher than the collective market value of RM1.59 trillion of last year’s 184 members. The RM1.69 trillion constituted 90.8% of the total market cap of Bursa Malaysia as at end-March — a testament to the significance of this elite group of companies.

To be sure, the end-March cut-off date is not ideal. Not only did the FBM KLCI decline 9.2% from 1.863.46 points as at end-March to 1,691.5 points as at end-June before rising 6% to 1,793.15 points by end-September, Malaysia also experienced its first change of ruling coalition in May since independence 61 years ago. Then there’s the unexpected escalation in the US-China tariff war and the faster-than-expected pace of the US Federal Reserve’s interest rates normalisation despite the many tweets from US President Donald Trump. At the time of writing, the bellwether index was hovering near the 1,679.86 points it was at as at end-November.

We did consider recalibrating our share price data — used to determine winners for the highest returns to shareholders over three years portion of the BRC corporate awards — due to the late timing of the BRC gala dinner this year. We decided, however, to retain the June 30 cut-off to compute the total returns to be in line with the financial data for FY2014 to FY2017 used to calibrate winners in the categories for highest weighted return on equity (ROE) over three years and highest compound annual growth rate (CAGR) in profit after tax over three years.

The earlier end-March cut-off date for membership is to allow time for BRC judges for the corporate responsibility (CR) component, which makes up 30% of the marks for The Company of The Year award.

Carlsberg Brewery Malaysia Bhd has been in the BRC top 20 in all eight of the annual rankings since 2011, with the exception being 2010, the year the BRC awards began.

Dialog Group Bhd and Public Bank Bhd  made it six out of nine times to the BRC Top 20, while Dutch Lady Milk Industries (M) Bhd, Guinness Anchor Bhd and Hap Seng Consolidated Bhd have made it five out of nine times.

It is also worth noting that of the eight companies chosen as The Edge BRC Company of The Year since our inaugural awards in 2010, seven continue to outperform the FBM KLCI in terms of total shareholder returns since winning the distinction.

We will present more data on this next year in the 10th edition of The Edge BRC corporate awards and gala dinner.

With their outperformance came sizeable gains in their respective market capitalisation.

For this year, due to our end-March 2018 cut-off date for BRC membership, OldTown Bhd, which delisted in April, is still listed as a member. Meanwhile, Mi Equipment Holdings Bhd, which debuted on the Main Board on June 20 this year and had just over RM1 billion market cap at the time of writing, is not on the list.

If the BRC membership cut-off date had been end-November, there would have been 157 members as eight companies would be added, 20 companies would be excluded for slipping below the RM1 billion market cap, and one delisted. The additions would have been Taliworks Corp Bhd, Guan Chong Bhd, GHL Systems Bhd, Mi Equipment, SAM Engineering & Equipment Bhd, TA Enterprise Bhd, Ranhill Holdings Bhd and MyNews Holdings Bhd.

This year, we only recognised companies with the highest scores in each category. We did not present “silver” awards as there were only three categories where scores between the top two companies were marginal (less than 0.5), unlike what we saw last year.

This year, we also updated the awards sectors to be in line with sectoral changes made by Bursa Malaysia on Sept 24. Five new sectors were introduced, three were renamed and four removed.

We continue to split companies with big market cap from others in the Financial Services and Property sectors, as we believe those of the same size should be measured against each other rather than against companies with a totally different market cap.

Even as more companies get bigger and better, the bar continues to rise with every improved performance.

To borrow the words of Datuk Ho Kay Tat, publisher and group CEO of The Edge Media Group, “2018 has been an unprecedented year for Malaysia. The historic change in government has had some immediate consequences for businesses — better for some and not so good for others. A clear economic strategy to take the country forward is still in the making. This uncertainty together with the volatile global environment present many challenges to Corporate Malaysia. But as the saying goes, when the going gets tough, the tough gets going, as BRC members have consistently proven.”

Ultimately, companies that continue leading the pack are those able to sustain outperformance over the long haul.

Membership of this elite group is automatic and complimentary for all companies listed on Bursa Malaysia as at March 31, 2018, with at least RM1 billion in market capitalisation. There are 170 members in the club this year.

As recognition is the best reward for accomplishments, it is The Edge’s hope that the awards continue to encourage more companies to strive even harder for excellence.

To be eligible for the corporate awards, a BRC member must have been listed at least four calendar years before the end-March cut-off date in the current year, as companies are evaluated on their financial performance over three years.

The methodology for the corporate awards is both stringent and transparent, with the results audited by Deloitte Malaysia. The data used to determine the companies that qualify for The Edge BRC membership and winners of The Edge BRC Corporate Awards is provided by Asia Analytica Data Sdn Bhd as well as extracted from Bloomberg.

Winners for The Edge BRC Highest Returns to Shareholders award are judged purely based on total return, consisting of share price gains and dividends over a three-year period. The cut-off date this year was June 30.

The annual end-March cut-off date for BRC membership was unchanged due to the need to source CR information for the judges’ consideration.

Companies with scores within 0.5 point of each other are deemed to be of the same rank in determining the winner. There could, therefore, be cases of joint winners for the awards.

The Edge BRC Company of the Year award recognises the year’s best company based on the following factors:

The final decision on The Edge BRC Company of the Year takes into account other qualitative elements as determined by The Edge.

The winner(s) of this award is determined by The Edge based on an assessment of the person’s contribution to value creation for his/her company. Here, value creation is reflected in the company’s market valuation, return to shareholders and stakeholders, revenue and profit growth as well as employment creation. To be chosen, the CEO must have achieved outstanding success in all these areas. Assessment starts from when the person became CEO of the company. The Edge has absolute discretion in deciding on this exclusive award and can choose not to name a winner — as was the case in 2011 and 2015.

In 2012, the recipients were AmBank Group founder and chairman Tan Sri Azman Hashim and AirAsia Bhd co-founder and group CEO Tan Sri Tony Fernandes. Azman remains a financier for all seasons, while Fernandes won for his role in transforming Asia’s aviation industry.

In 2013, the award went to Tan Sri Abdul Wahid Omar and Tan Sri Liew Kee Sin, former president and CEO of S P Setia Bhd. Abdul Wahid was recognised for his leadership during his tenure as CEO of Renong Bhd (2001 to 2004), Telekom Malaysia Bhd (2004 to 2008) and Malayan Banking Bhd (2008 to 2013), while Liew won for his contribution at S P Setia, a company he left in April 2015 (after about 18 years) for niche developer Eco World Development Holdings Bhd.

In 2015, the award went to Khazanah Nasional Bhd managing director Tan Sri Azman Mokhtar, who was instrumental in not only transforming the institution but also the collective transformation of 20 government-linked companies across varied industries.