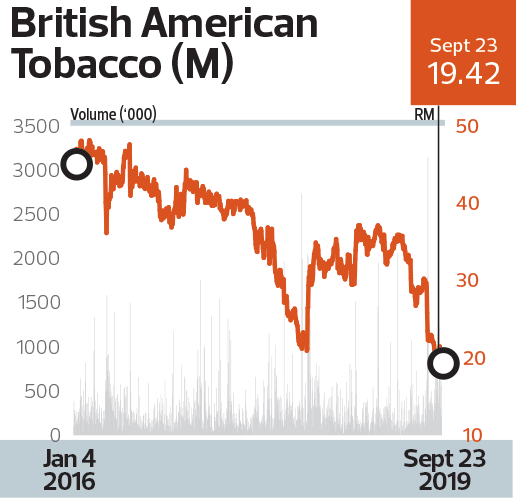 Six out of 10 cigarette packs consumed in Malaysia are from the illegal market — this is the difficult landscape in which legal tobacco players such as British American Tobacco (M) Bhd (BAT) operate, on top of an unregulated vape market.

Despite these obstacles, BAT has once again bagged The Edge BRC award for the highest return on equity (ROE) over three years in the Consumer Products and Services category — its second consecutive win.

BAT’s net profit has been on a downward trend in the past three financial years. Its net profit for FY2018 dropped nearly 5% to RM469 million from RM493 million in FY2017, and was 35% lower versus RM721 million in FY2016. This translates into a compound annual contraction rate of 13%.

BAT is probably a rare company among the BRC award winners, with continuously declining profits in the three years under review.

BAT attributes the reduced profits to the loss of market share to contraband cigarettes; the legal market shrank 3.5% in 2018.

Following the abolishment of the Goods and Services Tax on June 1, 2018 and the re­introduction of the Sales and Services Tax three months later, the price of a pack of cigarettes was increased by 40 sen, as the tobacco industry is regulated to pass any tax increment to consumers. There was no excise increase in 2018, making it the third consecutive year of excise moratorium for the industry.

As BAT’s profits went downhill, so did its share price. The stock has seen volatility with a downward bias in recent years amid growing concern about its profitability as the illegal cigarettes trade fluorished.

In its FY2018 annual report, BAT said the group’s market share in Malaysia is 56.3 % of the legal market. The group’s strong position is built on a portfolio of high-quality tobacco brands such as Dunhill, Kent, Peter Stuyvesant, Pall Mall and Rothmans.

FY2018 was the first full year in which BAT’s supply chain operated on an import-based model, where a majority of finished goods are sourced from parent company British American Tobacco Group’s factory in Indonesia, with others from its factories in Singapore and South Korea.

The group closed down its iconic manufacturing plant in Virginia Park, Petaling Jaya on June 22, 2017 after 55 years of operation, during which it made such a mark that the then roundabout beside the factory was known as the “Rothmans Roundabout”.

In its 2018 annual report, BAT acknowledged the huge challenge it faces in the form of the illegal market, as growth stagnated at about 60%. It said growth in 2019 relies heavily on the legal volume recovery, which requires continuous and intensified enforcement actions.

Despite the increasingly difficult operating landscape, BAT has no intention of exiting the market for now, it says, as it is still a profitable company, albeit with declining profits.

Managing director Erik Stoel says BAT will continue to gain as much share in the legal market as possible, but without policy intervention from the government to look into cigarette affordability and legalising vaping — which will allow legal players such as BAT to compete against the illicit ones — the outlook for the legal tobacco industry remains subdued in the medium term.