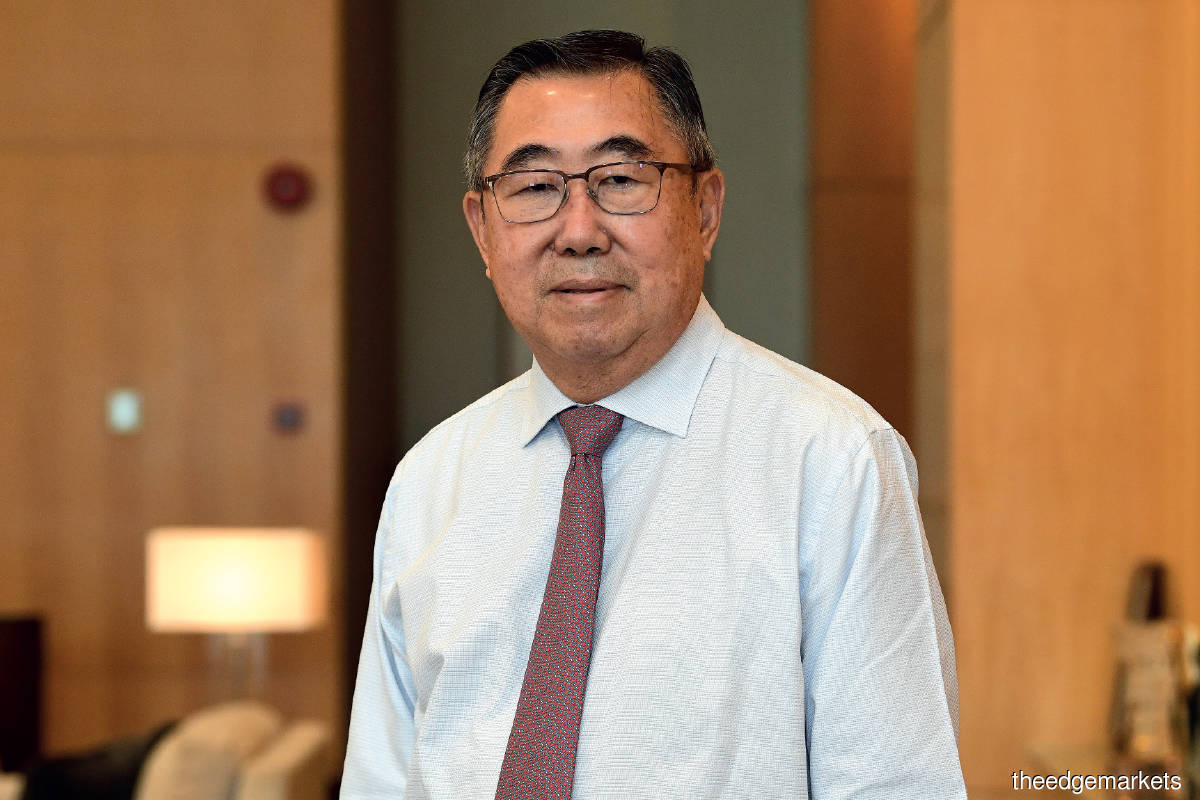 "The values [of the company] started with [my father’s] values, which continue in the company — honesty, hard work and loyalty. — Lee (Photo by Patrick Goh/The Edge)

In 1993, when Tan Sri Lee Oi Hian took over from his father, Tan Sri Lee Loy Seng, as chairman and CEO, Kuala Lumpur Kepong Bhd (KLK) was already one of the biggest oil palm plantation companies on the local bourse, with a sizeable land bank of over 100,000ha (252,000 acres) in Malaysia and some interests downstream.

Since then, the company has grown, expanding along the palm oil value chain as well as geographically with interests in Indonesia, Germany, the Netherlands, Belgium, Switzerland and China, while increasing its total planted area to 284,000ha.

But Oi Hian, 71, sees himself as merely a steward of his late father’s legacy, watching over it for future generations and its stakeholders.

“KLK was taken over by my father and I’m the second generation stewarding the company. The values [of the company] started with his values, which continue in the company — honesty, hard work and loyalty. Simple, old fashioned values that have [held us well] through the years. As we progressed, we added values to our DNA. We’re not perfect but we’re guided by these values,” says Oi Hian, who is also the chairman of Batu Kawan Bhd, KLK’s holding company.

With a bachelor’s degree in agricultural science from the University of Malaya (UM) and a master’s degree in business administration from Harvard Business School, Oi Hian recalls being naïve, thinking he already knew a lot.

“I was very naive, I graduated, life was good, I did my UM degree, I worked one year (in KLK) and went to Harvard. All this makes you think you know a lot of things. I was lucky when I came back, I didn’t join KLK immediately,” he tells The Edge.

Instead, he helped out at his father’s family business before rejoining KLK for good, under Loy Seng’s tutelage.

“He was a good mentor with his lifestyle, simple values and group of friends. I just got carried along and I was fortunate I had my agricultural background. I started learning from the people who’d been around, many who have already passed on. I’m grateful to the many people who touched my life, taught me about the industry and gave me the confidence to grow,” says the soft-spoken Oi Hian, who was appointed to KLK’s board in 1985.

The important lessons Oi Hian learnt from his father were the simple way he lived, and his honesty. “He was a very caring person. I’m not him because I cannot be exactly like him. I have my strengths and weaknesses but these are the lessons he has taught me,” he says.

Roy Lim, who served KLK for 42 years and retired as the group’s plantations director in 2017, notes that not many knew that Oi Hian had a first class honours degree in agricultural science as this is not highlighted in company reports.

“He does not flaunt his achievements, a reflection of his humble nature … and [there was] no glorious position for Oi Hian upon returning with an MBA but he learnt the ropes of the business from bottom up through the various sections in the company. That is how he became so rounded in all aspects of the business, which greatly helped him when he took over the reins from his father,” he says.

Lim first met Oi Hian in UM when they were residents of the Fifth Residential College. According to him, Oi Hian’s humility and unassuming nature was such that many of their friends did not know of his family background. It was only later that friends gave him the nickname “the tin tycoon” because of his family wealth built on tin mining before venturing into rubber and palm oil.

“I joined KLK when Tan Sri’s father was at the helm but I served mostly under Oi Hian. His father was a shrewd entrepreneur with a good eye for business opportunities and must have mentored Oi Hian well as he showed similar traits when he was put in charge,” says Lim.

The entrepreneurial spirit continued with Oi Hian as he brought KLK to greater heights.

“Although the expansion of plantations started during his father’s time, Oi Hian never let up and persevered with his expansion in Indonesia despite encountering much challenges in the initial stages due to culture change. As a result, Indonesia holds the bulk of KLK’s plantation land today,” Lim explains.

With Oi Hian at the helm, the acquisition trail continued in Sumatra, Kalimantan and Liberia. KLK’s farmland in Australia was also expanded to 45,000ha with 85% dedicated to wheat, canola and other crops.

Lim points out that KLK’s land acquisitions were conservative in the early days, made using internal resources.

“Analysts had always remarked that KLK could do more with its cash. Oi Hian was more aggressive when he took over and saw the opportunity to leverage KLK’s strong balance sheet to borrow and expand faster but always within prudent limits. Hence, [there was] faster growth of the company under his leadership. This is an important role of a dynamic but prudent CEO,” he adds.

An investor observes that Oi Hian is always measured in his moves, as he thinks over them carefully. “Of late, he’s been very bold whereas in the past, he was more conservative. He has certainly grown into his role,” he says.

KLK’s most notable acquisition under Oi Hian’s leadership may well be the takeover of IJM Plantations Bhd (IJMP), which has over 61,000ha of planted area.

In an earlier interview with The Edge, Oi Hian explained that brownfield acquisitions were the only way for KLK to expand given its commitment to the No Deforestation, No Peat, No Exploitation (NDPE) policy as a member of the Roundtable on Sustainable Palm Oil. Besides that, IJMP would balance KLK’s ratio of plantations between Malaysia and Indonesia while increasing the traceable feedstock for its downstream processing.

According to Lim, KLK’s diversification deeper downstream into oleochemicals and specialty chemicals, beginning with the small acquisition of Palm-Oleo Sdn Bhd, was Oi Hian’s brainchild. KLK has aggressively expanded its footprint in this space with various investments in specialty fats and oleochemicals in the last 30 years, starting with the opening of its first oleochemical plant in Rawang in 1991. In 2004, it opened the Zhangjiagang oleochemical plant in China and in the following year, it invested in a manufacturer of phytonutrients from palm fruits, Davos Life Science in Singapore.

KLK also expanded to Europe, adding various specialty fats and chemical manufacturers to its portfolio. They include Dr W Kolb Holding and Elements Specialties in the Netherlands, Croda Emmerich and Emery Oleochemical’s plant in Germany, and TensaChem in Belgium.

The move downstream was aimed at optimising value across the supply chain while vertically integrating the upstream and downstream businesses. The group’s downstream or resource-based manufacturing business was rebranded as KLK OLEO in 2006 and is a major revenue earner for KLK, sometimes more than plantations — consistently so since FY2018 — but the latter remains its most profitable segment.

The property development business also grew, with KLK Land behind major developments such as Sierramas, Desa Coalfields and the township Bandar Seri Coalfields.

Lee Jia Zhang, KLK’s chief operating officer, says that while Loy Seng was a giant in the industry, widely recognised for founding and building up the company, the story of the second generation — Oi Hian and brother Datuk Lee Hau Hian (KLK’s non-independent, non-executive director and Batu Kawan’s managing director) — that came into the leadership position in the early 1990s is not often told.

“For perspective, in 1992, KLK had 74,000ha of planted area (45,000ha oil palm) and recorded a Patami (profit after tax and minority interest) of RM87.9 million, having no significant oleochemical and Indonesian presence then. As at FY2021, KLK had a total planted area of 284,000ha (275,000ha of oil palm), generating a record Patami of RM2.26 billion, with a significant presence in Indonesia and an oleochemical business that generated RM10 billion in revenue across Asia, China and Europe,” he says.

In this period, KLK’s market capitalisation soared from RM1.7 billion in 1992 to RM22.7 billion today.

“He achieved this while continuing the values and embracing the legacy of ethical practices of his father. Even before governance and sustainability became commonplace, he had the vision to drive the company towards this direction, professionalising the whole company in the process,” says Jia Zhang, who is Oi Hian’s eldest son.

Sharing an insight into Oi Hian’s personal side, Jia Zhang says that while his father is ambitious and driven in growing the company, he is also a very simple man who enjoys gardening, feeding his fishes and reading. “He is a man of very simple needs with genuinely little material desire,” he adds.

Another trait unique to Oi Hian is his ability to disconnect after work despite all the pressure and stress. “Even in the early days, he would come home at a reasonable time, play tennis with his regular kakis, and weekends were spent mostly with the family and in church. He has never sacrificed family time for work, despite being able to accomplish so much throughout his career,” says Jia Zhang.

Having worked together for 13 years, Jia Zhang says his father’s strategic vision as a corporate leader is one of his many strengths — investing for the long term and being patient in realising that vision.

“Big decisions are often made quickly and decisively, without the unnecessary layers of bureaucracy, but always through the right corporate process to ensure no blind spots in respect of ethical and legal compliance. Being able to drive growth yet keeping the company on a very prudent footing, he has always emphasised sound fundamentals in making any decision, not being carried away during good times or bad,” he explains.

“He’s a good listener, always seeking the views of top management before making a major decision. Oh yes, no vacillating as he is a quick decision maker and this simplified the job of execution for his managers, but always taking responsibility for his decisions. Such is his humility. Oi Hian was a good mentor to me and others as well,” says Lim, adding that The Edge Billion Ringgit Club Value Creator: Malaysia’s Outstanding CEO award for Oi Hian is well deserved and maybe even overdue.

On the award, Oi Hian stresses that he is not receiving it alone but with the people and company he leads. “We’re very honoured and in a way humbled by this prestigious award. We’re grateful to be among the many CEOs who have won this prize,” he says.