Top Glove Corp Bhd, the world’s largest rubber glove maker, has had a powerful rally in the first half of 2020 and outshone its super big-cap peers in terms of its share price performance.

The company’s share price skyrocketed to RM5.186 (adjusted price after bonus issue in 2020) on June 30, 2020, from 89.6 sen on June 30, 2017. This translated into a total return of 81.2% for the three years, giving Top Glove The Edge Billion Ringgit Club award for the highest returns to shareholders among companies with a market capitalisation of more than RM40 billion.

The share price rally continued to gain momentum until news of success in vaccine development started to emerge in August. More recently, problems at its workers’ dormitories and high Covid-19 infection among its workers made headlines. For a brief period, Top Glove had the second highest market capitalisation on Bursa Malaysia at RM72.17 billion on Oct 9. The main fuel for the share price rally was the anticipation of exponential earnings growth over the next two years.

The majority of analysts who track the glove manufacturer have a “buy” recommendation, according to Bloomberg. The average target price is RM9.77, with the highest at RM15.45 and the lowest at RM5.40. 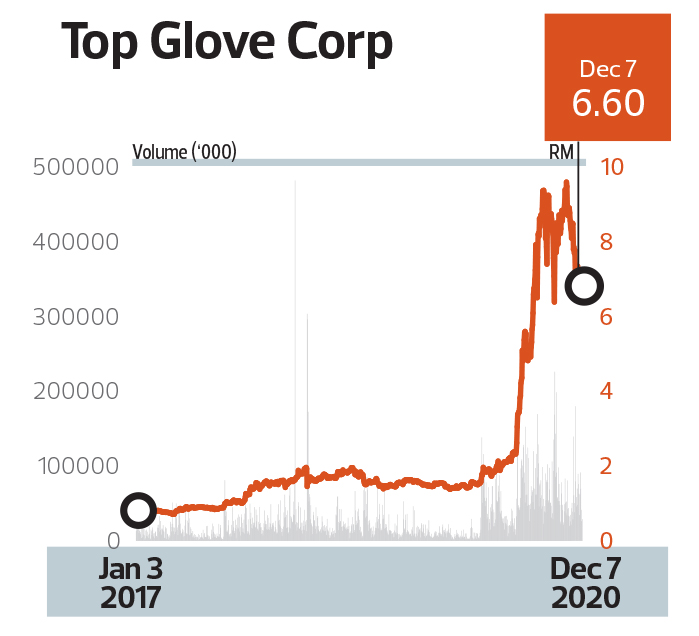 Given the good financial performance, Top Glove declared a higher dividend of 11.8 sen per share for FY2020, amounting to a total payout of about RM961.2 million, compared with 7.5 sen in FY2019.

Factory F41 — the group’s first factory in Vietnam — commenced operations in early November. The initial production capacity is about 2.4 billion pieces of gloves from its 10 production lines.

Overall, Top Glove has earmarked RM8 billion for capital expenditure (capex) over the next six years, from FY2021 to FY2026, which will provide it with an additional capacity of 100 billion pieces of gloves. The capex will be invested in new capacity, the enhancement of existing manufacturing facilities, a gamma sterilisation plant, land bank for future expansion, Industry 4.0 digitalisation and improvements to workers’ facilities.

Analysts remain positive on Top Glove’s prospects despite the race for vaccine development intensifying. HLIB Research foresees a promising and stronger FY2021 for the company, driven by higher demand and average selling prices, coupled with more spot orders, which are currently higher at 30% of capacity.

Meanwhile, MIDF Research says Top Glove’s product mix has enabled it to fulfil the different requirements from its various customers. “Due to the limited supply of NBR (nitrile butadiene) and long lead time for nitrile gloves [the nitrile glove spot order has been fully taken up for the next three months], some customers have decided to switch to powder-free natural rubber gloves as well as TPE (thermoplastic elastomer) gloves,” it adds.

Top Glove, which is listed in Malaysia and Singapore, is evaluating a dual primary listing on the Hong Kong stock exchange. It says more details on the proposed listing will be made available in due course.