Being part of the Sunway group, Sunway Construction Group Bhd (SunCon) might be perceived to have a natural contract source from in-house property development projects.

However, SunCon does not depend much on its parent company to replenish its order book. In-house construction jobs make up only roughly 30% of its outstanding contracts.

Its largest shareholder is Sunway Bhd via Sunway Holdings Sdn Bhd, with a 54.56% stake. Meanwhile, Sungei Way Corp Sdn Bhd, which holds a 10.08% stake in SunCon, controls a 51.36% equity interest in Sunway Bhd.

SunCon does not count on its parent company for construction works mainly because the group is capable of doing more complex engineering and construction services. As such, it could secure jobs that offer a wider margin by leveraging technology such as computer virtual design simulation.

In an interview with The Edge in February, Sunway Group president Datuk Chew Chee Kin said many internal jobs did not go to SunCon because the margins tend to be low. The group will award jobs to SunCon only if the subsidiary does not have enough jobs in hand. 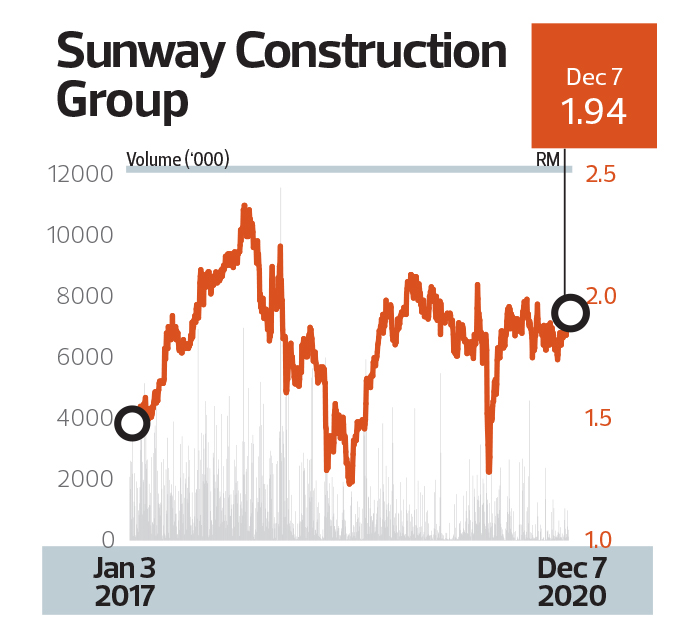 The group’s earnings performance translated into an adjusted weighted return on equity (ROE) of 23.4%. The high ROE has won SunCon The Edge Billion Ringgit Club award for the highest ROE over the last three years for the construction industry.

SunCon has been able to meet its target of securing RM2 billion worth of jobs this year even though the Covid-19 pandemic has ruined global economic growth.

Major new contracts secured by SunCon include the construction of the Thorapalli Agraharam–Jittandahalli highway in India worth RM508 million and a three-block residential condominium awarded by Sunway Belfield Sdn Bhd worth RM403 million.

Since SunCon has been able to meet its FY2020 job replenishment target by September, it will be no surprise if the group exceeds the target by year-end. It has the capacity to sign up contracts worth RM2.2 billion to RM2.5 billion a year.

“Note that the group has clinched its eighth highway project in India in 1QFY2020, worth about RM508 million. We do not discount the possibility of winning more construction projects from India in 4QCY2020,” says MIDF Research analyst Khoo Zhen Ye.

Given the country’s unprecedented nationwide Movement Control Order (MCO), which halted construction jobs for 2½ months, it might be a challenge for SunCon to maintain its ROE above 20% in 2020. The earnings disruption is already reflected in its financial results for 2QFY2020.