Intense competition among telecommunications operators is showing in their bottom lines globally but early investors of Digi.Com Bhd are still getting decent total returns despite its share price being off its peak in 2015.

Its consistent dividend payments made Digi the winner of The Edge Billion Ringgit Club’s (BRC) award for highest return on equity (ROE) over three years (FY2016 to FY2019) among big-cap stocks or companies with RM10 billion to RM40 billion market capitalisation. Digi has won in this category every year since it was introduced in 2016.

Among The Edge BRC members in the telecommunications and media sector, Digi’s adjusted weighted ROE over three years of 242% was more than double the runner-up Astro Malaysia Holdings Bhd’s 94% and Maxis Bhd’s 25.8%, according to the BRC methodology.

Its quarterly dividend payments no doubt helped put Digi among the Employees Provident Fund’s top 30 holdings as at Sept 30, 2020. In just over two months, the provident fund had increased its stake of 14.74% to 14.82% as at Dec 3, according to stock exchange filings at the time of writing. 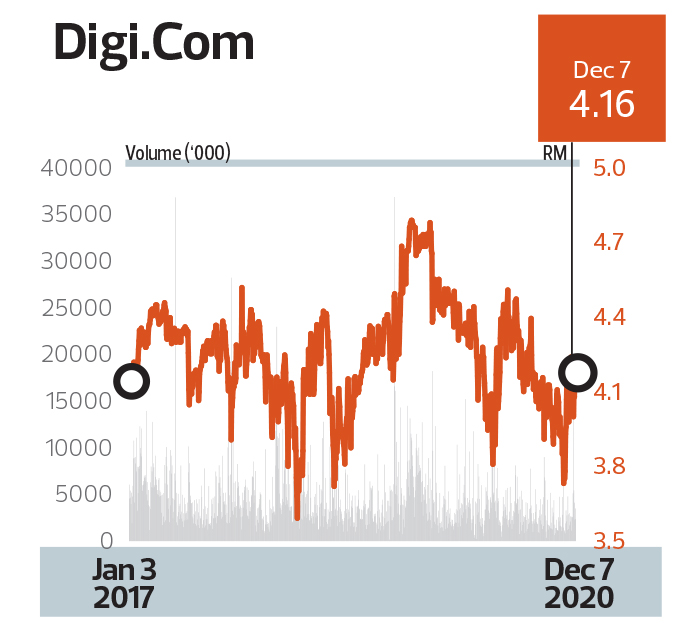 Dividend yield remains decent, especially in the current low-yield environment, but most analysts reckon that its share price is no longer cheap. There were 13 “hold” recommendations compared with seven “sell” and four “buy” calls, according to Bloomberg data at the time of writing.

Interestingly, Nomura, which has the highest target price of RM4.87, has a “neutral” recommendation while analysts from Public Investment Bank and JF Apex Securities, who both have a “buy” call, reckon Digi should be worth RM4.75.

Investors are no doubt looking out for signs of improved earnings, with Digi intensifying efforts to win over higher-quality subscribers as well as grow its business-to-business solutions in line with the government’s digitisation push.

It may not be out of the woods yet in dealing with the challenges arising from the Covid-19 pandemic. In notes accompanying its third-quarter earnings release, Digi said “the industry continues to face unmatched headwinds due to the third wave of Covid-19 in Malaysia and its uncertain effects on the economy” and guided that service revenue (down 3.1% y-o-y in 9MFY2020) would see “low-to-medium single-digit percentage decline” for the full year while earnings before interest, tax, depreciation and amortisation (Ebitda) — down 7% in 9MFY2020 — could see a “medium-to-high single-digit percentage decline”.

Nevertheless, Digi has committed to “sustain industry-leading levels of efficiency alongside [its] responsible business promise” by accelerating growth efforts through targeted offerings of connectivity services, to enhance network and IT modernisation initiatives to secure reliable and consistent service quality as well as to optimise its cost structure and cash management to secure resilient cash flow.

Beyond operations, investors are no doubt keeping watch for signs of other potential collaborations that could significantly lower costs and free up more cash for investment in new growth areas as well as dividend payments. Recall that the mega merger between Axiata Group Bhd and Telenor Asia — which would have combined Digi and rival Celcom Axiata Bhd into an entity larger than Maxis — was called off in September 2019. Even if a full-fledged merger doesn’t happen, something that significantly reduces network duplication and results in significant cash savings would no doubt be music to investors’ ears.