Maxis Bhd’s move to start setting aside RM1 billion for what it calls “growth capex” some two years back to reach enterprise customers proved prescient this year as the world went through various degrees of lockdown to counter the Covid-19 pandemic. The pandemic means that businesses have little choice but to be digitally ready and it is by catering to the burgeoning demand in this area that Maxis sees itself transforming from a consumer- and mobile-centric player into the country’s leading converged communications and digital services company.

As it turns out, its growth strategy is in line with the government’s desire to speed up the digitisation of businesses, especially small and medium enterprises, to drive the development of the digital economy to boost the nation’s economic growth.

In a way, Maxis has little choice but to set its sights beyond individuals to digitally connect companies, homes, the government and even things, as everyone who wants a mobile phone already owns at least one. It has set itself an ambitious service revenue target of RM10 billion by 2023, a target that is made even tougher this year because of Covid-19. Headline revenue for the nine months ended Sept 30, 2020 of RM6.71 billion was 0.27% below the RM6.72 billion booked in the same period last year. Net profit for the same period of RM1.07 billion was about 8.4% lower year on year.

Yet, if its bet pays off, the potential growth in new areas like cloud computing and managed services stands to bring in sizeable new revenue streams for Maxis and its technology partners. Some of its investments for growth may well take away cash that would otherwise go towards rewarding shareholders but Maxis CEO Gokhan Ogut has said that any additional capex essentially enhances Maxis ability to sustain decent dividend payments for years to come.

Yield-seeking investors would know that Maxis has been paying dividends every quarter for the past decade, although the absolute payout had halved to about RM1.5 billion a year between FY2015 and FY2019 from RM3 billion a year from FY2010 to FY2014. 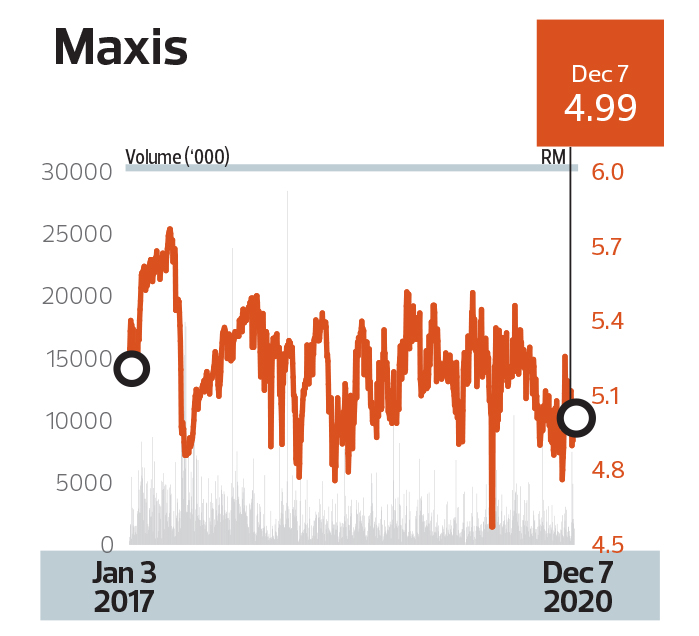 Even though Maxis was no longer among the Employees Provident Fund’s top 30 holdings as at Sept 30, 2020, the provident fund still had an 11.63% stake in Maxis as at Nov 30 this year and is the second-largest shareholder after billionaire Ananda Krishnan.

Analysts polled on Bloomberg reckon, however, that its share price is no longer cheap, even though its dividend yield remains decent. There were 15 “hold” recommendations on Maxis compared with nine “sell” recommendations and only two “buy” calls from Credit Suisse and Macquarie, with the target prices of RM6.45 and RM5.82, respectively. The most bearish target price of RM4 probably also reflects a floor of sorts, given that a dividend of 16 sen would reflect a 4% yield at that price.

Whether or not conditions will deteriorate further before they improve or Maxis will demonstrate confidence with better dividends as early as the fourth quarter, its dividend payments have made Maxis the winner of The Edge Billion Ringgit Club’s highest return on equity (ROE) over three years (FY2016-FY2019) award among Super Big Cap stocks or companies with RM40 billion market capitalisation and above.

Maxis has been the winner in this category every year since its inception in 2016.