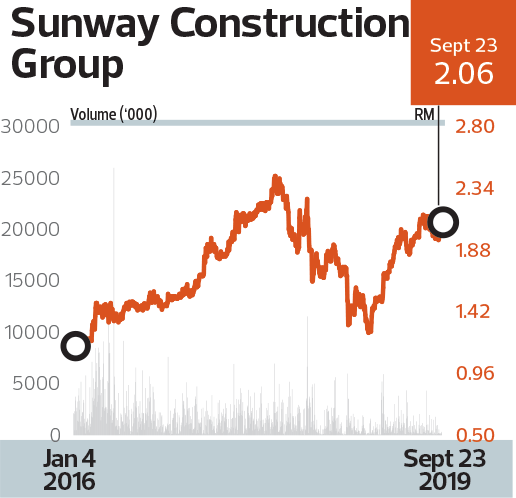 Construction giant Sunway Construction Group Bhd (SunCon) walked away with the award for highest return on equity (ROE) over three years for the construction sector at The Edge BRC awards.

The ratio, which measures how well a company utilises shareholders’ funds to generate profit, stood at 16% and 31% in FY2014 and FY2015, respectively.

Going forward, Kenanga Research analyst Adrian Ng expects SunCon’s ROE to ease to 19% in FY2019 before improving to 22% in FY2020.

While the research house remains unexcited with the near-term prospects for the construction sector, Ng points out that SunCon’s management is venturing overseas with an active tender book of RM12.5 billion.

“We believe the company stands a good, winning chance in the Asean market, thanks to its strong execution track record. Nonetheless, its outstanding order book of RM5.8 billion provides 2½ years of visibility,” he says in an Aug 20 report.

SunCon operates predominantly in Malaysia and Singapore in construction and precast manufacturing. It is one of the largest builders in Malaysia.

Being a fully integrated construction firm, SunCon is mainly involved in the construction of speciality buildings, civil and infrastructure works, mechanical, electrical and plumbing services as well as foundation and geotechnical works.

The group also has two precast manufacturing facilities in Johor, which cater for the housing development market in Singapore.

Notably, SunCon had secured a RM1.6 billion new order book for FY2018. The group is targeting RM1.5 billion worth of new orders for FY2019.

The group’s latest project, the TNB (Tenaga Nasional Bhd) Campus at Bangsar, Kuala Lumpur, is on a site measuring about 13 acres and has a contract duration of 26 months. It comprises eight buildings — office blocks, a child care centre, gallery and convention centre.

Despite the lower performance, group managing director Chung Soo Kiong says SunCon is positive on the outlook for the local construction sector with the revival of the RM44 billion East Cost Rail Link (ECRL).

“There are also opportunities within the sustainable energy sector, such as in the development of Large Scale Solar (LSS) Phase 3. We are expecting more projects to be announced in the next 12 months, which was reflected by Bursa Malaysia’s FBM Construction Index gaining more than 40% since the beginning of this year,” Chung says.

Apart from Malaysia, Chung says Asean is another exciting market that the group is exploring.

“In Myanmar, SunCon has teamed up with Capital Construction Ltd, the construction division of Capital Diamond Star Group (CDSG), and we have submitted a tender for a mixed-use development project in Mandalay,” he says.

The group’s outstanding order book, as at June 2019, amounted to RM5.8 billion, with a total of RM1.537 billion in new orders received to date, exceeding management’s target of new order book wins of RM1.5 billion within the first half of the year.

Since SunCon — the construction arm of conglomerate Sunway Bhd, which was founded by tycoon Tan Sri Dr Jeffrey Cheah — was relisted on Bursa Malaysia in 2015, its share price has almost doubled from its initial public offering price of RM1.20.