Press Metal is The Edge BRC’s Company of the Year 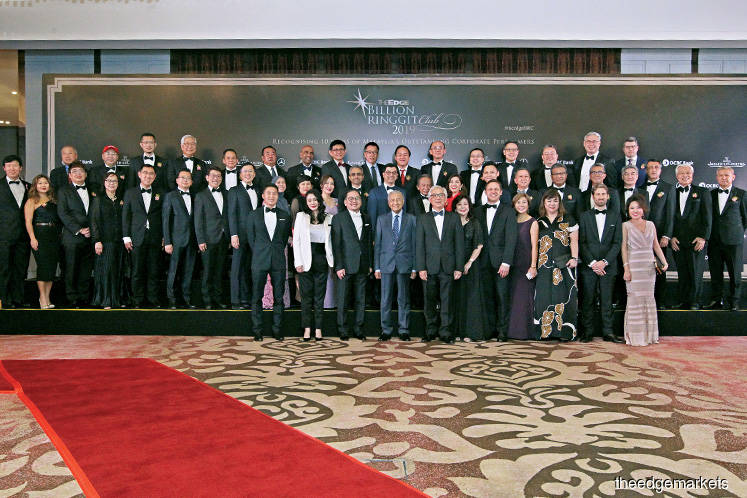 Dr Mahathir (centre), flanked by Tong (on his right) and Ho (on his left), with BRC winners. Photo by Kenny Yap

Prime Minister Tun Dr Mahathir Mohamad graced the event, which started 10 years ago to honour Corporate Malaysia’s crème de la crème, with the aim of encouraging Malaysian companies to be even better at what they do, to grow, to invest, to create jobs as well as be socially responsible. That, in turn, is hoped to inspire others to excel.

“To be recognised and to win awards, companies must grow their profits, be more efficient, invest in technologies, exhibit high returns to shareholders through dividends and stock price,” The Edge Media Group chairman Datuk Tong Kooi Ong said in his welcome address.

A total of 60 awards were presented to 43 companies. A special award for contribution to nation building was presented to The Employees Provident Fund (EPF), whose chairman Tan Sri Samsudin Osman accepted the award from Dr Mahathir.

When met by The Edge Financial Daily after receiving his award, Press Metal’s Koon said: “We feel very honoured, but this honour goes to all our employees, because they are the ones that contribute and make the company what it is today. So, a big thank you to all of them.

“We also believe that with the award and honour, we will continue to work harder to reward shareholders and the investors,” he added.

After winning The Edge Billion Ringgit Club Company of the Year award back in 2011, QL’s Chia said winning this year’s Outstanding CEO & Value Creator is “out of [his] expectations”.

“While we will recognise many successful companies tonight, the hard truth is that over the past six years, many companies listed on Bursa Malaysia have not done well. This is evident by the continuous decline in profit margins,” said Tong, who also noted how Malaysian companies have not invested enough to become more efficient by embracing technologies and new opportunities, so that profit margins will increase and the companies will be better placed to compete and remain competitive.

That said, BRC members continue to be major taxpayers, paying an estimated RM26.04 billion in taxes in FY18.

The awards are in its 10th instalment this year. Companies with at least RM1 billion market capitalisation as at March 31 each year are added to the annual The Edge-BRC membership list automatically and are evaluated on growth in profit, return to shareholders and corporate responsibility (CR) commitments, among others.

“Our awards, like BRC, are coveted by Corporate Malaysia, because the methodology and criteria are transparent and independently audited — [they] cannot be bought,” Tong said. “[Just as The Edge is] trusted by our readers because we are credible and honest”.

OCBC Bank (Malaysia) Bhd, a key partner since the award’s inauguration in 2010, returned as the main sponsor for the 10th year.

“It’s been a decade now since we first started honouring the best of the best, and the winners have always been worthy of the high honours bestowed on them. Our heartiest congratulations to this year’s winners for going the distance and improving significantly on all counts including the important area of sustainability. We must all continue to ride the crest of the wave we are on in order to be both viable and meaningful for the future,” OCBC Bank (Malaysia) Bhd CEO Datuk Ong Eng Bin said, noting how the awards have grown to be recognised as the gold standard for showcasing Corporate Malaysia’s quest to mesh outstanding business acumen with sustainability, inclusiveness and corporate responsibility.

“I thank OCBC, Jaeger-LeCoultre and Mercedes-Benz for their steadfast support of the BRC. This prestigious annual gathering would not have become Corporate Malaysia’s most anticipated corporate awards ceremony without these excellent partners,” Ho said.

Details on The Edge BRC members and award winners will be published in a special supplement in the Sept 30 issue of The Edge Malaysia weekly.