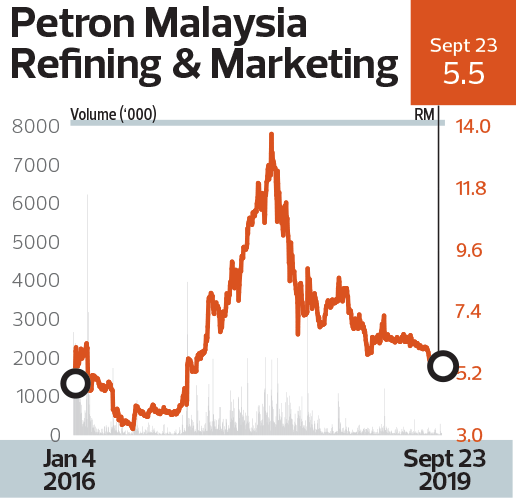 Although Petron Malaysia Refining & Marketing Bhd saw its net profit slide 44.6% in the financial year ended Dec 31, 2018 (FY2018), the refiner’s return on equity (ROE) over the three financial years in review was admirable.

ROE came in at 10.42% in FY2018, which is an impressive performance compared with that of its peers. It is worth noting that the double-digit ROE was achieved despite volatile crude oil prices. Oil prices reversed their upward trend in the fourth quarter of 2018, with Brent crude plunging from US$86 per barrel in October to a low of US$50 in December that year.

Apart from the high ROE, Petron also declared regular healthy dividends. In FY2018, it paid 20 sen dividend per share (DPS) out of earnings per share of 83.2 sen. This is consistent, considering the crude oil refiner declared a DPS of 25 sen for FY2017 and 22 sen for FY2016.

It is worth noting that FY2017 was an outstanding year for Petron. It achieved a record high net profit of RM405.2 million, up 70.6% year on year, supported by stronger oil prices and higher sales volume, which drove full-year revenue up 36% year on year to RM10.4 billion.

In FY2018, revenue continued to grow, by 16% to RM12.05 billion, fuelled by higher international crude oil prices and steady growth in sales volume.

However, Petron’s net profit dipped to RM224.54 million in FY2018, which was partly dragged down by thinner profit margins. In addition, Petron said the company had booked a non-recurring gain of RM65.6 million in FY2017 from the compulsory divestment of service stations required by the government. This explained the slide in net profit for FY2018 due to the absence of one-off gains.

Petron Malaysia is part of Petron Corp in the Philippines, an emerging and rapidly evolving Asian oil company. It operates the Petron Port Dickson Refinery (PDR), which has a rated capacity of 88,000 barrels per day, producing a wide range of petroleum products, including gasoline, diesel, liquefied petroleum gas (LPG), industrial and commercial fuels and aviation fuel.

The group grew its total sales volume in FY2018, which reached a record high number of 35.5 million barrels, up 2% from the 34.9 million it sold in the previous year.  Petron continued to increase its number of stations in 2018 to more than 640, together with its sister company, Petron Fuel International Sdn Bhd, significantly increasing its penetration of the retail segment.

The company also did scheduled maintenance of its Port Dickson refinery in October, which reduced the production of low sulfur waxy residue and naphtha, which are export products.

While exports were down, domestic sales, particularly in the retail sector, continued to grow in FY2018. The company attributed the positive trend in retail sales to higher demand for high-performance fuels, such as its Blaze 100 Euro 4M and Turbo Diesel Euro 5, complemented by a more rewarding Petron Miles loyalty card programme.

Petron had previously said that it remains cautious as it sees more uncertainties in oil prices during the year, amid the re-escalation of the US-China trade war and ongoing geopolitical tensions.

Despite thinning refining margins, Petron said it will continue to focus on growing its sales and is committed to embarking on various strategic programmes such as network expansion, plant and facility improvements and supply-chain enhancement to improve sales volume and market presence.

Petron chairman Ramon S Ang previously said that the group is pursuing strategic programmes aimed at strengthening its brand, increasing its presence and providing excellent products and services to its customers.

He said it was exciting that the group’s Port Dickson refinery is set to complete its new diesel hydrotreater to comply with the government’s requirement to supply Euro 5 diesel, as well as a new import facility with two new product tanks in 2020.