IOI Corp Bhd - A heart for education and community development 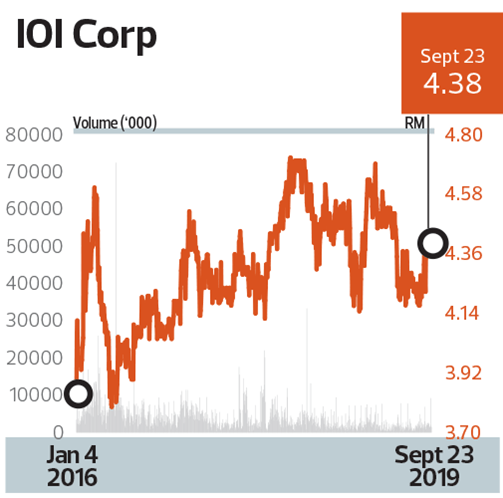 IOI Corp Bhd’s Yayasan Tan Sri Lee Shin Cheng (TSLSC), which was named after its late founder, has impacted countless beneficiaries since 1994 in its passion to help and relieve those in need of financial and medical assistance.

At the heart of the foundation’s focus are education advancement and community welfare.

To date, Yayasan TSLSC has contributed about RM44 million to various schools, hospitals, welfare homes and charitable bodies, and has given out scholarships, grants and awards to more than 2,500 students.

In the 2018 financial year (FY2018), Yaya­san TSLSC awarded RM111,200 to 257 needy students from 26 primary and secondary schools in Peninsular Malaysia and Sabah under its Student Adoption Programme (SAP) 2018. Each primary and secondary student will receive RM800 and RM1,000, respectively, until completion of their primary or secondary education, or both.

“Since its inception, the SAP has benefitted more than 1,000 students from over 200 schools in Peninsular Malaysia and Sabah. To date, the programme has funded more than RM4.1 million in the form of sponsorships,” IOI Corp says in its 2018 annual report.

The development of science, technology, engineering and mathematics (STEM) is also an important cause to the group. In 2017, it collaborated with Chumbaka Sdn Bhd and Agensi Inovasi Malaysia to sponsor the IOI-Puchong STEM Programme. The nine-month community project was aimed at exposing 210 students from 10 schools in Puchong to STEM.

“IOI contributed RM112,875 to its STEM programme, where a two-hour workshop was conducted by Chumbaka every week [after school] to promote students’ interest [in] STEM fields while providing opportunities to spur students’ passion to innovate.

“The project ended with the [email protected] Maker Faire 2017 on Nov 12, where 150 students showcased their inventions using knowledge acquired from the STEM programme,” says IOI Corp.

The foundation presented a RM10,000 cheque to Montfort Boys Town to support its mission of equipping less fortunate youth with the right skills for employment and to defray its operational costs of RM6 million a year.

Besides holding educational and social investment programmes, the group also encourages and provides employees with ample opportunities to volunteer their time and actively participate in corporate responsibility activities organised by Yayasan TSLSC.

Some of the memorable activities included bringing cheer to residents of old folks’ homes and organising outdoor team-building sessions for children from orphanages.

As a palm oil producer, the group prioritises protection of the environment. Last year, it sent representatives to the local communities in the vicinity of IOI Pelita’s Sejap and Tegai Estates to update them on IOI’s progress on the Roundtable on Sustainable Palm Oil and also contributed cash to each community for the Gawai celebration.

IOI also held a three-day sustainability awareness drive in Sabah in conjunction with the International Run for Orangutan 2018 exhibition to create awareness of the plight of the endangered orangutans and to enhance environmental and wildlife care.