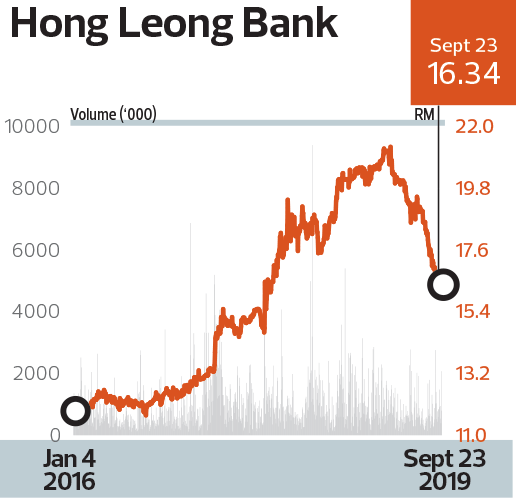 Few things make investors happier than seeing an upward trend in a company’s share price and receiving regular dividends. Shareholders of Hong Leong Bank Bhd have been enjoying precisely these over the past three years.

The stock has climbed 63%, from RM12.353 to RM20.30, between April 1, 2016, and March 31, 2019 — the period of review for The Edge Billion Ringgit Club. The bank has outperformed its banking peers on Bursa Malaysia against a backdrop of uncertainties on the macroeconomic front globally.

For January to August 2019, Hong Leong Bank’s share price declined 18%, in line with the general downward trend among banking stocks. However, some analysts feel it is a good time to start accumulating the shares, given the attractive valuation.

AmInvestment Bank Research, for one, upgraded its call on the stock to “buy” from “hold”, but reduced its fair value by RM1.60 to RM18.90.

“We see upside potential after the steep decline in its share price, with the stock now trading at a low 1.2 times FY2020 PBV, below its historical mean of 1.5 times,” it says in an Aug 29 report.

Despite a challenging year, Hong Leong Bank turned in a resilient set of earnings for FY2019 that fell within analysts’ expectations.

Its profit grew 1% to RM2.66 billion in FY2019, helped by solid loan growth of 6.6% — stronger than the industry’s 4.2% — and a stronger contribution from its Chinese associate, Bank of Chengdu. Its operating revenue, however, fell 2.3% to RM4.73 billion, reflecting intense funding cost pressure.

The banking group stands out in the industry for its solid asset quality and cost control. Its gross impaired loan ratio stood at a record low of 0.78% as at end-June while its cost-to-income ratio (CIR) was a low 44.3% despite having grown slightly from 43.5% a year ago.

Following the FY2019 results, AmInvestment Bank Research trimmed its FY2020/FY2021 earnings forecasts for Hong Leong Bank by 5.7%/3.5% to reflect higher cost-to-income ratio assumptions and to factor in another potential 25 basis points (bps) cut in the overnight policy rate (OPR) in the second half of this year. A cut in the OPR would hurt its net interest margin (NIM) further.

“Even so, we remain sanguine as the impact to NIM in 4QFY2019 was managed within 11bps quarter on quarter, despite the 25bps cut in OPR in early May. This [was] achieved through a mix of strategic and tactical decisions that leave us confident, moving forward, that we can improve our NIM, especially off the back of such commendable growth in our loan book, without compromising asset quality,” group managing director and CEO Domenic Fuda said in the bank’s results press release.

Profit contribution from Bank Of Chengdu, in which it has a 18% stake, grew 7.4% to RM554 million, accounting for 17.4% of Hong Leong Bank’s profit before tax.

Most analysts, however, remain cautious about business and consumer sentiment in Malaysia, given the prospect of slower global growth. Nonetheless, analysts believe that Hong Leong Bank is among the more resilient banks in harsher economic weather.

“We think Hong Leong Bank is one of the most defensive banks against the expected rise in the industry’s impaired loans as it is known to have one of the most stringent credit control practice,” says CGS-CIMB Research, which has a “hold” call on the back of the stock’s decent valuation.