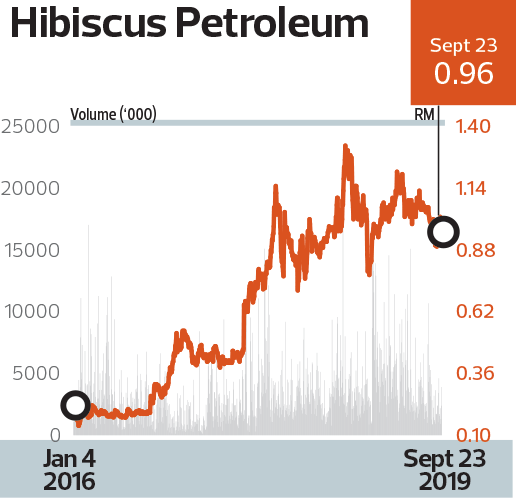 The Anasuria cluster of oil and gas (O&G) producing fields in the North Sea and the North Sabah enhanced oil recovery (EOR) fields have given Hibiscus Petroleum Bhd the required foundations to grow on since 2015.

The fields contributed to the turnaround in Hibiscus, from a net loss of RM60 million in the financial year ended June 30, 2016 (FY2016), to a net profit of RM106.1 million in FY2017. The group has been profitable since then.

In the recently concluded FY2019, Hibiscus — which was listed as a special purpose acquisition company on Bursa Malaysia in 2011 — reported a net profit of RM230 million, on the back of revenue of RM988.3 million.

Hibiscus has yet to declare any dividends, mainly because of a need to conserve cash for its capital expenditure given that the O&G upstream business is highly capital intensive.

However, its board does recognise the importance of rewarding its shareholders. The company undertook a bonus issue of warrants on the basis of one warrant for every five existing shares in March last year.

The O&G exploration and production company needs to conserve capital, more so now that it is taking part in the greenfield development of the Marigold and Sunflower fields in Central North Sea off Aberdeen, the UK.

Hibiscus says the Marigold and Sunflower fields are a potential game changer for the group due to their low entry cost of US$1.25 per barrel and expected US$8 per barrel valuation based on the average transaction value per barrel for fields under development by Rystad Energy.

Based on the best estimate oil resources of 60 million standard barrels and US$8 per barrel valuation, the fields would have a gross valuation of US$480 million, of which Hibiscus’ share would be US$240 million.

By December next year, Hibiscus expects the UK Oil and Gas Authority to have approved the fields’ final development plan. Meanwhile, the final investment decisions for the development of the fields would have also been finalised by then.

Hibiscus is targeting for the fields to produce first oil in December 2022. By that time, the group expects them to be valued at US$1.2 billion, of which Hibiscus’ 35% stake would have a net valuation of US$420 million.