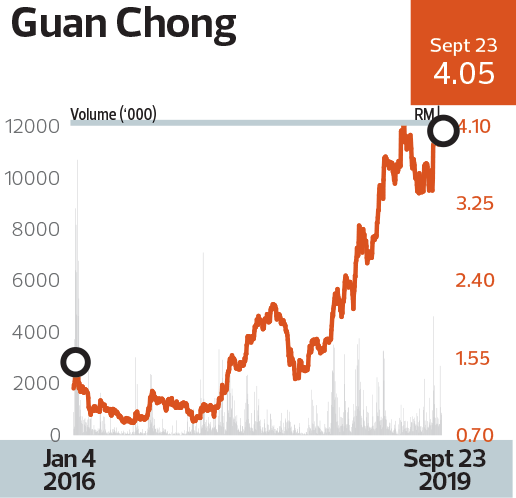 Looking at the share price performance of Asia’s largest cocoa grinder, Guan Chong Bhd, one can imagine how pleased its shareholders must be.

By May this year, the stock had climbed even higher to RM4.15 and was still above RM4 at the time of writing.

Guan Chong’s capital appreciation, coupled with its dividends for the past three years, won the company The Edge BRC highest return to shareholders over three years award in the Consumer Products & Services segment.

Guan Chong attributes its improved earnings to wider margins as a result of economies of scale.

In FY2018, Guan Chong expanded one of its grinding facilities in Pasir Gudang, which increased its production capacity from 9,000 tonnes to 50,000 tonnes.

The group also owns two facilities in Delaware and New Jersey in the US that undertake cocoa cake grinding, cocoa liquor and butter melting, as well as cocoa butter deodorising.

In the 2018 annual report, Tay says global demand for chocolate is expected to continue rising for the foreseeable future while supporting data indicates that cocoa grinders in Asia may chart higher grinding activity in 2019 to cater for increasing demand.

Nonetheless, Tay notes that the group is exposed to four risks, namely competition, consistent supply of cocoa beans, cocoa bean price volatility and foreign currency fluctuations because the majority of Guan Chong’s transactions are done in US dollars and pound sterling.

In this regard, Tay says the group aims to continue to grow its share of the global cocoa ingredients market, and is guided by two strategies: increasing its production capacity and expanding its geographical presence.

“To capture market share, we intend to increase our grinding capacity in order to meet the expanding requirements of major customers worldwide,” he adds.

He says the full commissioning of the expanded plant in Pasir Gudang enabled the group to capture rising demand, and management is looking at utilising the extra capacity expediently.

As for increasing its geographical presence, Tay says the group will explore opportunities to expand production facilities in major cocoa-producing countries in order to enhance its competitive edge.

“This will provide significant cost savings in freight and transport as well as enhance our manufacturing supply chain,” he adds.