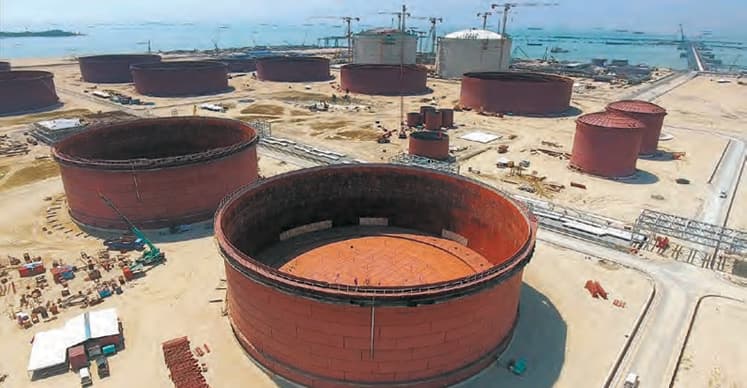 The development of Pengerang Deepwater Terminal Phase 2 in progress. Picture by Dialog 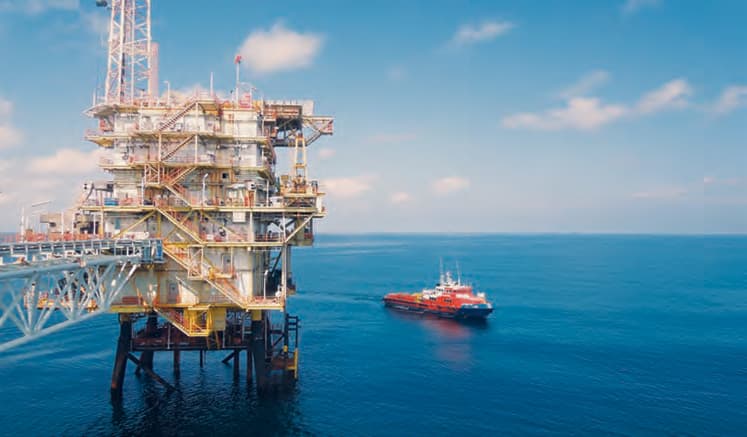 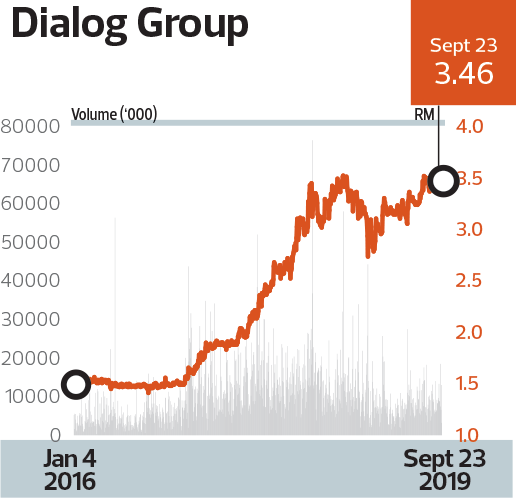 Looking at Dialog Group Bhd’s profit after tax (PAT) figures over the past three financial years, those unfamiliar with the company might not realise that it is in the oil and gas (O&G) business.

This is because Dialog’s PAT has consistently been on an upward trend, even when the crude oil price plunged below US$30 in 2014.

This translated into a three-year CAGR of 22.9% — an impressive figure and the highest among members of The Edge BRC in the energy sector.

Dialog’s decision to venture into the midstream segment to develop an oil storage terminal in southern Johor proved timely as the division became the key contributor to its earnings when its upstream business was not faring as well. The division is expected to bring in recurring income for the group.

The oil storage terminal, named Pengerang Deepwater Terminal (PDT), is sitting on 1,200 acres of reclaimed land. The group envisions making Pengerang the Rotterdam of the East — a regional downstream hub for the oil, gas and petrochemical industries, given Malaysia’s strategic location.

The facilities in PDT also complement the development of the Refinery and Petrochemical Integrated Development (RAPID) project, which is part of the massive downstream project called Pengerang Integrated Complex driven by Petroliam Nasional Bhd.

Dialog last Thursday launched Phase 3A of the PDT development after the group signed a long-term storage agreement with BP Singapore Pte Ltd.  It said this will comprise storage tanks with a capacity of 430,000 cu m for clean petroleum products, and is set to be completed in mid-2021.

Phase 3A is the first parcel of PDT’s Phase 3, where the construction of common tankage facilities (including shared infrastructure) and deepwater marine facilities (Jetty 3) are already underway.

This marks the continued expansion of PDT in Pengerang, Johor, where Phase 3 is currently being developed on about 300 acres of land within PDT with an indicative initial investment cost of RM2.5 billion, said Dialog.

PDT’s combined storage capacity has grown to 2.6 million cu m in Phase 1 and 2.  There are dedicated deepwater jetty facilities that can cater for very large crude carriers and liquefied natural gas regasification facilities, with two storage tanks with a combined capacity of 200,000 cu m.

According to Dialog, if an investor had subscribed for 1,000 shares with an investment of RM2,750 at its initial public offering in 1996, the investment would have been worth RM856,910 as at September last year after taking into account the dividends received, seven rounds of bonus issues and a rights issue in 2012 plus stock dividends. This translates into a CAGR of 33%.

Moving forward, Dialog does not plan to rest on its laurels, with plans to acquire oilfields to expand its upstream business.

In this sector, the group will continue to actively develop new reserves from its existing contracts, says its executive chairman Tan Sri Dr Ngau Boon Keat in its 2018 annual report. “At the same time, Dialog is looking for viable production assets, which may become available for possible acquisition,” adds Ngau, who is the controlling shareholder with a 20.03% stake.