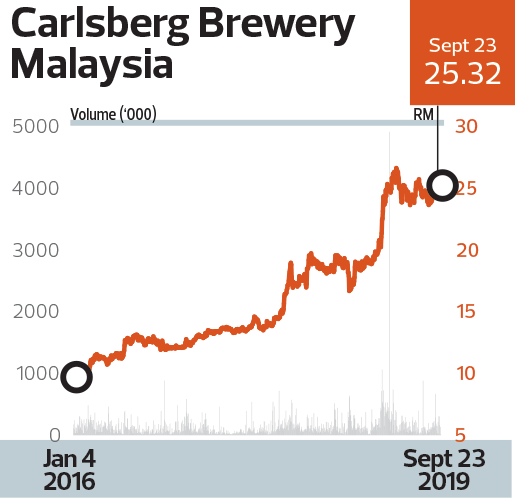 To ensure it succeeds in doing its part to protect the environment and as a responsible corporate citizen, Carlsberg Brewery Malaysia Bhd has set itself some serious targets — from zero water waste and zero carbon footprint to zero irresponsible drinking and zero accidents culture, the group is firm on making a positive economic, environmental and social impact.

Its zero carbon footprint target is to achieve zero carbon emissions at all of Carlsberg Group’s breweries by 2030.

“Intermediate targets for 2022 include a 50% reduction in emissions and a switch to 100% renewable electricity, plus eliminating coal as an energy source.

“We also aim to reduce our beer-in-hand carbon footprint by 15%, and to have 100% low-impact cooling, and to establish 30 global partnerships with suppliers by 2022, leading to a reduction in our shared carbon footprint.

“We are confident that it is possible for businesses to reduce emissions significantly while still driving growth,” the brewery says in its 2018 annual report.

Carlsberg Malaysia says it is always on the lookout for ideas and new ways to enhance packaging efficiency and reduce energy use and carbon emissions at its brewery.

“In 2018, our brewery’s heat energy consumption stood at 23.17 kwh/hl, an improvement from the previous year’s 23.23 kwh/hl. The reduction in energy usage is partly due to improvement in hot insulation, which was mainly on heat supply piping and boiler stations.

“We will continue this initiative in 2019 with more focus on packaging equipment, including bottle washers and pasteuriser body insulation. This can potentially result in energy savings of between 10% and 15%.

“We have also installed energy meters for all levels of production to enable more detailed consumption monitoring, while prioritising focus areas,” the group says.

Carlsberg Malaysia is also proud of its flagship programme, the Top 10 Charity, which is “unique in that it has successfully helped over 600 schools raise more than RM520 million over three continuous decades — a feat as yet unmatched in Malaysia and which earned it a place in the Malaysia Book of Records as the longest-running Chinese education charity campaign with the highest funds raised”.

Established since 1987, the programme is a fundraising platform for the development of Chinese education in the country, through charity concerts in collaboration with vernacular schools. Funds raised are used for infrastructure upgrades such as new classrooms, administration buildings and school halls, as well as roofed recreational facilities.

“In 2019, Top Ten will seek more partnerships from Chinese vernacular schools so that more schools and students can benefit from the campaign,” the group says.

When it comes to its own human resources, Carlsberg Malaysia does not take its employee development lightly, committing to building a high performance culture in the workplace. It says it will keep strengthening its employee base with continuous learning and development. Also to continue are nationwide workshops and roadshows to drive employees’ awareness of performance management, total rewards and individual development plans.