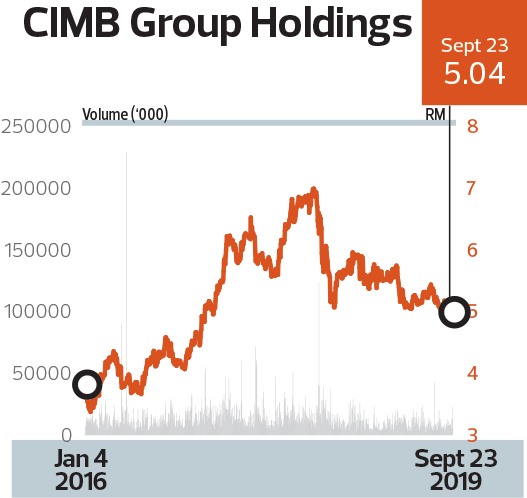 CIMB Group Holdings Bhd has bounced back from a rough few years on the earnings front.

After a poor financial showing in FY2015, when net profit fell 8.3% year on year to RM2.85 billion, the Asean-focused banking group turned the corner in FY2016. It recorded a 25% jump in net profit to RM3.56 billion, thanks to the improved performance of its Indonesian bank PT Bank CIMB Niaga Tbk, for which it had to make heavy loan loss provisions in the previous year.

A year later, it saw further growth of 25.6% in net profit to RM4.48 billion as overall provisions declined and its Thai lender returned to profitability.

And in FY2018, despite the challenging operating landscape, the group posted a record high net profit of RM5.58 billion, which was 24.8% higher year on year. Excluding one-off gains from divestments that year, its net profit grew 4% to RM4.66 billion.

Between FY2015 and FY2018, CIMB Group’s net profit grew at a three-year compound annual growth rate of 25.1% — the highest among its peers in the financial services (RM10 billion and above market capitalisation) sector.

Its four-year transformation plan, known as T18, came to an end last year and based on its core earnings, it was able to deliver on all but two of its key targets.

The group has since embarked on a new five-year strategic plan, known as Forward23.

“T18 was always about us narrowing the gap [with leading Asean banks] because we were so far behind. Now that we’ve done that, Forward23 is where we want to accelerate to in order to become the top three to top five bank in the region in terms of metrics like CIR, ROE, CET-1 ratio and profit before tax,” group CEO Tengku Datuk Seri Zafrul Aziz told The Edge in an interview in March.

Achieving these will not be an easy task as challenges remain for the group, including the uncertainties created by the trade tensions between the US and China and slowing global economic growth.

Still, CIMB Group’s core net profit in the first six months of FY2019 grew 11.6% year on year to RM2.45 billion, which was marginally above analysts’ expectations. The growth was underpinned by above-industry loan growth of 6.6% in Malaysia and better income from treasury and markets.

CIMB Group expects Bank Negara Malaysia to cut the overnight policy rate (OPR) by another 25 basis points before the end of the year — a move that could further hurt its net interest margin, which slipped 4bps to 2.46% year to date, mainly due to the 25bps cut in OPR in May.

“The impact [of another OPR cut] on us will be marginal, depending on when in the year it happens. We expect a compression of 1bps to 2bps on NIM for FY2019,” Zafrul told reporters last month.

Analysts currently have a more positive outlook on the stock, which has shed 9.3% for the year to end-August. It closed at RM5.06 on Aug 29.

At the time of writing, Bloomberg data showed 14 analysts with a “buy” call on the stock and 13 with a “hold”. There were no “sell” recommendations. The average 12-month target price was RM5.80.

“We maintain our ‘buy’ call on the stock as valuation continues to be undemanding, trading at 0.8 times FY2020 price-to-book value. Its dividend yield has also turned attractive at 5.5%.

“The group’s treasury and markets business could potentially continue to benefit from the lower yields to increase its investment and trading income,” AmInvestment Bank Research says in an Aug 29 report.