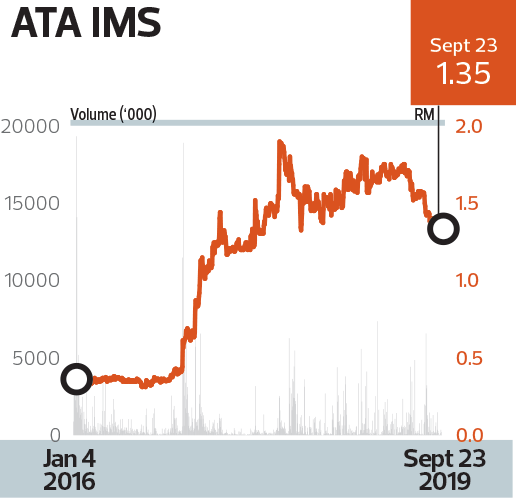 ATA IMS Bhd is more proof of the promising prospects of the manufacturing industry if one manages it well. The electronic manufacturing services (EMS) player’s return on shareholders’ equity was well above that of its peers in the past three years — 22.3% in the financial year ended March 31, 2018 (FY2018), 37.9% in FY2017 and 22.5% in FY2016.

ATA IMS’ earnings have been on a fast growth track since it acquired its larger rival, Integrated Manufacturing Solutions Sdn Bhd (IMS), in October 2017.

The company’s gross profit margin improved from 7% to 8%, thanks to continual efforts in effective cost management strategies and operational efficiency, coupled with continuing efforts to negotiate fair prices with customers and perseverance in meeting their requirements.

ATA IMS’ impressive financial results have not gone unnoticed. Its share price has been on a steady climb in the past two years, after the reverse takeover exercise.

Given the stellar financial performance, ATA IMS, formerly known as Denko Industrial Corp Bhd, walked away with the award for highest return on equity (ROE) over three years for the industrial products and services sector at The Edge BRC awards this year.

This is another notable win for the Johor-based electronic manufacturing services (EMS) company, which had won the award for highest returns to shareholders over three years for the industrial products and services sector at last year’s awards.

Desmond Chong expects ATA IMS’ ROE to hit 20.6% in FY2020, 21.9% in FY2021, and 21.6% in FY2022. “In view of the higher product complexity that ATA IMS has recently undertaken, the group is embarking on a higher automation to enhance efficiency and improve quality in order to defend its turf,” he says in a July 25 report.

In an interview with The Edge Financial Daily in March, ATA IMS executive chairman Datuk Seri James Foo Chee Juan said he is expecting the growth momentum to continue in FY2020, thanks to higher sales volume from its existing customers.

Foo, a 58-year-old Singaporean businessman, was appointed executive chairman and executive director of Denko in March 2017,

before the company’s name was changed to ATA IMS in July 2018.

With IMS, the enlarged Denko became one of the top three EMS players on Bursa Malaysia, along with SKP Resources Bhd and VS Industry Bhd.

Today, ATA IMS is ranked as one of the world’s top 30 EMS companies, according to the Manufacturing Market Insider 2019 list of top EMS providers in 2018.

In the current financial year, the group will continue to ramp up its production capacity to cope with an expected increase in orders from its key customers. The additional factories acquired in FY2019 increased production space by about 49%.

According to Bloomberg data, all three research houses tracking ATA IMS had “buy” recommendations on  the counter, with a consensus target price of RM1.82, giving it a potential upside of 30%.